The singer has gone on to making a name for himself in his hometown Leicester and Loughborough, where he currently lives. He has raised money for Loughborough charities such as the hospices Rainbows and LOROS as well as PACE, an organisation helping people in poverty. “When it came to releasing this single, with the message behind the song being so powerful, it was a natural decision to donate all revenue from downloads and streaming to three local charities that I support. The meaning relates very well with each of these charities and all people involved” , says the songwriter.

The song managed to get to number 91 in the Amazon charts in overall songs and for a while Ronoc saw himself placed next to David Bowie at number 3 on the Amazon rock charts during the initial stages of the release.

Timberlake or Seal. With an all-embracing attitude towards music, his own sound is difficult to categorise. Taking components of rock/pop a la Paul Weller or Sting and giving them a more mature character, often with hints of jazz or folk, Ronoc creates somewhat of a worldly touch with his music which ultimately makes his songs both unique and interesting.

Ronoc has started his solo career two years ago after having previously played with the indie band The Vacations who had been featured on MTV and played the main stage at Strawberry Fields Festival in Leicester in 2013.

Currently, the artist is charity busking in Leicester as a lead up to an event he is organising at a local church in Loughborough on 27th February this year. This event will once again raise money for the charities he supported during the first release of ‘Battling On’.

Byron Major has achieved quite a lot for an artist in his early 20s -he’s performed his song ‘South Africa’ for Nelson Mandela’s Boston birthday celebration in 2013, shared a stage with Pavarotti for his farewell tour in South Africa as part of the Drakensberg Boys Choir and sang alongside Grammy Awards winning songwriter Paula Cole at a songwriting showcase at Berklee College of Music. His new single ‘May Flower’ is a funky and addictive soul track produced by multi-platinum selling producer Andy Whitmore in the Londoner Greystoke Studios.

His upcoming single ‘May Flower’ was part of a series of EPs he released during his time at Berklee. The song speaks about the push and pull that lovers experience in a passionate relationship. As someone who has never had a relationship, Byron Major draws his songwriting inspiration from reflecting other people’s relationships and reflects on life in general.

UK dance music heroes, Chase & Status have been announced as one of the main acts for this year’s BBC Radio 1 Big Weekend, alongside Coldplay and Bring Me the Horizon.

Saul and Will joined Nick Grimshaw on his Radio 1 Breakfast show this morning to chat about playing the iconic free festival and their plans for 2016, including new music.

They also premiered a snippet of a new song on the show that you can hear on the duo’s socials and on their website. The full track will be played as a worldwide exclusive as Annie Mac’s Hottest record on 23rd Feb and they’ll be in the studio with her for a sit down on their big plans for this year.

You can hear the clip here: 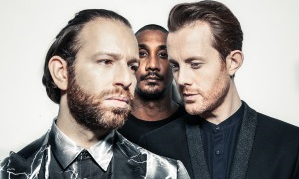 ‘Radio Noises’ is part and parcel of a collection of songs that were written as an ode to the out of space.  Focussing on the imagery of two astronauts who are floating away from a space station to be saved by aliens, songwriter Scott explains: “‘Radio Noises’ is about losing contact, it’s about the astronauts losing contact with NASA and ultimately earth as they float into space but the track can also be linked to losing contact in general, whether it be with friends, family or you’re just going a bit crazy.”

Hailing a new era of spaced out grunge guitar rock, Moon Rover are continuing the legacy of bands like Smashing Pumpkins or My Bloody Valentine with their first single release.

Having already been picked up by radio stations like BBC Newcastle and BBC Tees numerous times, the four students Scott, Dan, Cameron and Stephen have spent their uni days skipping lectures and making a buzzing record with components from grunge to shoegaze and psychedelia instead.

Reminding of a young Kurt Cobain, singer Scott Hepple is screaming his heart and soul into the dynamic debut single ‘Radio Noises’ which taken from the upcoming self titled album.

“We cannot wait to hear more of these guys”

Bassman75’s new single ‘Don’t Judge Me (Fast Life)’ is a powerful tune which delivers a great, new found appreciation for life. The singer has been inspired to write the song after a near death experience from an allergic reaction to penicillin. Realising that life is for living, the R’n’B/Urban singer has consequently hit the studio to record a dynamic track that will keep every club night going. Bassman75’s catchy music complements his attitude towards freedom and choice perfectly. This is a great track to keep a good party going, can’t wait to hear more!

‘Confident’ songstress Demi Lovato has hinted that she would be perfectly happy if her long-term boyfriend Wilmer Valderrama proposed to her soon.

Speaking to Ellen DeGeneres this week, the beauty explained that they’ve been in a relationship for enough time to truly feel as though they know one another inside out, and she would quite like to look down at her hand and see a ring on her finger.

“I don’t see a ring. I wouldn’t mind if I saw one. There’s time for everything, you know. We’ve been together this long, and obviously I’m not going anywhere and vice versa.”

In August last year, Valderrama told Extra that he would definitely ‘be down’ to marry Lovato: “She’s writing the future. I really think she’s someone… that I hope… that it (marriage) fits in our future. I mean, I’d be more than down (to marry her). I love her so much.”

It’s almost a year to the day that Madonna famously fell backwards due to a cape malfunction at last year’s Brit Awards.

Madonna seems to have paid homage to that moment by pretending to be pulled back by her veil onstage in Bangkok as part of her Rebel Heart World Tour.

Madonna is wearing a head veil whilst belting out her ’80’s hit, ‘Material Girl’, when she holds onto the veil making it look like she is going to fall backwards like she did almost a year ago. The irony that she is singing ‘living in a material world’ whilst jokingly pretending to be pulled back by material has not gone amiss.

The star almost ‘falls’ but manages to keep her balance and stay upright (see below). She did not go down whilst fighting this veil, and she won’t go down without a fight when it comes to the custody of her son, Rocco, who refused to fly back to America to be with his mum.

Rocco has been staying with his father, Guy Ritchie in London. A hearing date at court has been postponed until March 2.

Most recently Houston rapper Black Diamond released a double dose of music to the world. One of the releases entitled “Work” is a motivational anthem; encouraging his fans to “work with what ya got.” Black Diamond has taken the unconventional road to success. He doesn’t rap about the cars and the women, he chooses to rap about the everyday struggles of today’s youth. His recordings have motivated fans in over 11 different countries for the past 3 years.

“Work” is one of only two releases that have debuted under Black Diamond’s Blind World Records, a company founded in 2016 by the young entrepreneur. Some of his other investments include Lambroghini Boards; a hover board company launched in 2015 and his very own travel agency due to be launched in the summer of 2017.

Listen to “Satisfied” on Spotify
https://open.spotify.com/track/32ST7eo3m3m4iqOD2lkvCe

Ben Stiller has praised Justin Bieber for his cameo work in Zoolander 2.

The singer first revealed that he was appearing in the flick in June.

Speaking to the BBC, actor Stiller – who plays model Derek Zoolander in the film – said Bieber was a professional throughout his time on set.

However, it seems the 21-year-old gets killed off in the movie.

The Hollywood man said: “Justin was amazing. He turned up and was ready to work. Really professional and open to do anything.

“The way he dies is probably a little extreme or over the top but it was in the script and he was in on the joke and had fun.”

Zoolander 2 is due to hit cinemas from February 12.

Having cultivated a sound that draws upon influences from EDM, dub and hardcore, Ragga Twins have spread the jungle vibes across various media platforms since the 90s. Apart from playing the stages of Glastonbury and Bestival, the duo has appeared on Jools Holland, various documentaries and Steve Jackson’s show at Kiss FM back in the days.

While their musical influences range from Prodigy to Shabba Ranks and James Brown, whom they had the pleasure of supporting on stage in the past, Ragga Twins are the quintessential prototype of the thrilling splash of madness that is jungle music.